Happy Mothers Day to all the ladies who read this blog.

This Mothers Days was very special for me as my favorite Labrador, Cookie, had a picture perfect delivery of ten healthy puppies. She was kind enough to finish up about an hour before I was to catch a plane, so while I was upset at leaving her at least I did not have to worry about her delivery while I was gone. I left on time for my seminar with Natural Pets Dog Training in Lafayette Indiana. This seminar, hosted by Natural Pets Nutrition and Dog Training, was packed full of information with a series of speakers in addition to my presentation on Medical alert dogs. One of the bonuses of the weekend was a private tour of 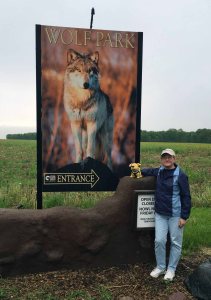 Wolf Park about 15 minutes north of Lafayette.   This sanctuary for wolves was started by the late Purdue University researcher Dr. Erich Klinghammer, and continues today as a primary study and educational outreach center on wolves.
I was fortunate to be able to talk to Patricia Goodman, one of the senior investigators who have been at Wolf Park for over 40 years. Pat is a wealth of knowledge on the ethology of wolves and I found her discussion on this topic as well as canid behavior very enlightening. For those not familiar with the science of ethology it is considered the objective study of animal behavior under as natural conditions as possible. There is also I learned a component looking at how this helps the species in evolutionary adaptation. The main thing is ethologists do not try to interpret what the behaviors mean, they simply observe and record. These observations are collected into Ethograms and it from these records that later analysis is done.

This is different from what you find most dog trainers doing, which is behaviorism. Behaviorism looks at the same thing but the focus is on trained behaviors and in more of a controlled setting. There is no attention on evolutionary adaptation in this case.

There is great value to everyone who deals with animals of any kind in knowing what their behaviors mean. It is only through the observations of these behaviors that we learn about our animal friends. What I personally found of particular value was a story shared about an incident with a visitor and two of the wolves.

A young visiting high school student was allowed to go into the pen to visit the wolves with 2 senior staff present. The pack consisted of the alpha male and alpha female, 2 other young female wolves and three littermates who were about nine months old. These wolves had been hand raised by humans except for the two young females who avoided humans. A male came up to her and started to play. The young girl was playing back and it appeared that all was friendly as all signs of the wolf’s behavior was that of what we dog people would call a “play” bow. During this interaction one of the non-hand raised female wolves started to circle behind the young visitor when one of the senior staff noticed this and called out to the girl to watch out behind her. At that very opportune moment when she turned her attention away, the male wolf leaped up and attacked the girl, biting her in the knee. The girl turned around and faced the male who backed off and the staff was able to get her out of there. Her injury was not serious. 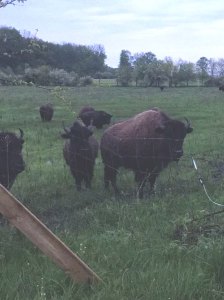 gressive dogs? You think that the dogs are playing but are they really? In this case, the conclusion was that the male wolf was not playing at all, but rather was testing the young visitor and waiting for his opportunity to attack. In fact as our group toured around we discovered a herd of bison on the farm, where investigators have allowed the wolves to approach the healthy bison in order to observe hunting behaviors. Wolves do not attack healthy strong bison, this has been well documented in their wild state; they go rather for the weaker of the animals in a herd. What the ethologists have observed is the same type bowing behavior in front of the bison, as was witnessed with the young visitor in the story above. It is felt this is really indicative of a ready stance, not a “play” bow, and is more of a test of whomever the wolf is facing, to see if they are strong or weak and whether there is an opportunity to attack.

What is interesting to me is the sudden change in the wolf’s behavior from play to aggression. I have seen this in dogs but unfortunately did not have video rolling at the time as the wolf park people did (they always have a video going when people are in with the wolves) but I suspect there were probably subtle cues from the dogs as well. As I have been talking to quite a few trainers these past weeks I am hearing more about aggression issues with our dogs. This makes me wonder about the underlying causes. Could it be the same as the wolves; are the dogs testing whomever they are “play” bowing to and were not really “playing” at all?

Some people have suggested that breeders are not being as careful with the temperament considerations when breeding and there is a decline in stability of temperament due to that. This is certainly a real possibility but cannot explain all of the issues.

Others have suggested that increased stressors in our modern environment are taking their toll on the temperaments of the dogs especially the family pet. Dogs are increasingly left alone for long periods of time, have less physical exercise and outlets for their natural activities and are under more pressure to be on their best behavior all the time with less time to just be able to act like a dog. This too is a real possibility that could contribute to increased aggressive behaviors.

What the wolf project has shown, is not until behavior is properly analyzed can any interpretation be offered. Far too often dog owners and even trainers are too quick to jump to conclusions about the cause of a particular behavior of a dog, especially when it deals with aggression at any level.

So perhaps we can take a clue here and make sure we understand what signals are dogs are giving us, learn how to give cut off signals, and give clear messages ourselves to our dogs so there is no misunderstanding of our intent.